Promote eco-friendly building technologies involving the society for their upliftment and empowerment.
01
Aug

Kachchh (Kutch), the largest district of Gujarat, India has its traditional and heritage capital as Bhuj, a city which flourished in the aegis of Maharaja Lakhpatsinhji. Bhuj has been a major cultural center with architecture evolved with a rich language. A land with a flat terrain completely barren, with small mounds in its periphery which was known as Bhujiyo Dungar. There is hardly any vegetation, and what we find are Cactus and Babool plants, all around. Scarcity of water is prevalent in the region and it is often struck by sandy whirls.

Kachchh being the home of various tribes such as Ahirs, Mutvas, Rabaris and Maldharis, migrated from the Middle East and Central Asia, are mostly engaged in cattle rearing activities and live in the make-shift kind of circular tents forming hamlets. These temporary structures are converted to permanent ones known as ‘Bhungas’, the most traditional form of houses found in Kutch. Whereas, we can find both the traditional types of houses as well as contemporary style houses with modern amenities, and constructed with traditional techniques such as rammed earth construction, and thus make them unique in terms of experience.

Our study trip to Bhuj was majorly focused on learning earth technology at Hunnarshala with infills of few site visits like Rudramata, Khammir, LLDC, to name a few. To learn the earth construction techniques, workshop based hands on experiences were given to us, which were worth working with. It allowed us to explore the materials to the fullest to understand its weaknesses and strengths.

Rudramata, a remote settlement from where the tropic of cancer passes and have a community, who suffered the loss of houses in earthquake and have been shifted here by the Government. The government and certain NGO and other non- profit organizations like Hunnarshala actively took initiatives to resettle them in this new place, where they constructed their own houses. These houses were circular with wooden frames and thatch covering. The articulation of the walls is done with small mirrors or abhlas stuck in varied patterns, can even reflect the sun rays from entering the house. These houses are very different from the houses of bhujodi, the bhujodi has normal brick mortar houses. And the houses in the villa housing have a load bearing walls of rammed earth and wooden frame to hold country tiles.

Hunnarshala was the heart of our trip as all these tings were associated with it.

‘Hunnarshala Foundation’ was founded under the NGO renowned as Abhiyaan in the aftermath of the 2001 earthquake and it started with a team of few artisans, engineers, architects, who worked out different construction techniques with the local eco-friendly materials, which we witnessed at Hunnarshala, where buildings have been constructed with materials and techniques
ranging from recycled wood ceilings, to wattle and daub and rammed earth walls, China clay used for plaster work, terraces to floors made from IPS or Terrazzo floor, and CSEB masonry walls.

Hunnarshala has two sections, where one section is designated with administrative affairs and designing work while another section known as Karigarshala, where artisans are taught basic construction skills and allow them to build on their own.

The first day of the earth workshop started with soil as a raw material procured from different area in Bhuj. They taught us to feel the soil and find its physical and chemical characteristics by touch, smell, sight. They also made us understand the difference between the three types of soil i.e. sandy, silty, clayey soils. Then with boiling we can find weight by weight proportions of soils present. We also conducted sieve test with different graded sieves of 2.1mm, 75 microns, 2 microns to separate gravel,sand,silt and clay respectively.

The next part of the workshop was understanding rammed earth construction technique in which we understood how the fixing of formwork with plywood boards greased with oil were laid and metal straps and locking keys were used to fix them into position. The sandstone dust, silty-clayey soil, cement and sand were mixed in the proportions of 3:1:1 and the water in 15% ratio with other ingredients was sprinkled. Once mixed, same composite mixture was rammed with heavy rammers between the formwork. By changing the stone dust, the key ingredient, we could achieve varied colors in the rammed earth walls.

In kachchh, the men are engaged in external affairs, while women stay at home getting indulged with activities like embroidery work, handicraft, jewelry making, to name a few, which we were able to study in detail in Living & Learning Design Centre (LLDC), who protects these crafts, promotes the traditional embroidery work of the different tribes of Kachchh and empowers women as Individual craft persons.

Also Watch: Breaking The Myths About Mud Houses. Why They Are More Sustainable!, Eco-Friendly House Of Mr. Rahul Deshpande

Note: Please note that above video is not any kind of advertisement or support to any individual or organization. Our only intention is to convey the environment message to viewers through the video.. 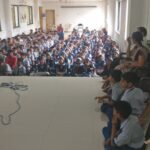 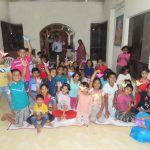 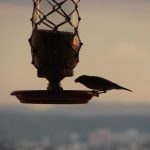